From NAFTA to CUSMA: opportunities for EU companies

From NAFTA to CUSMA: opportunities for EU companies 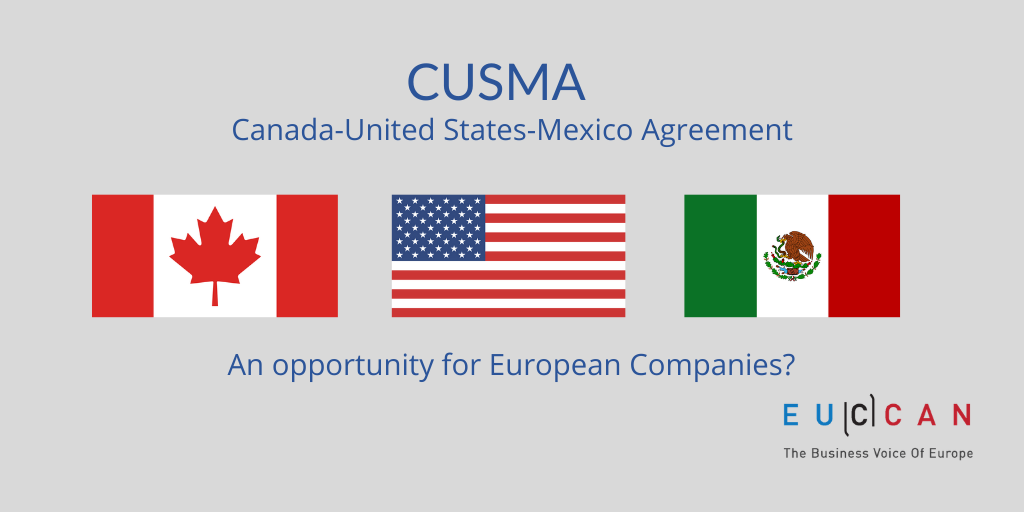 CUSMA, the Canada-United States-Mexico Agreement, came into effect on July 1st perfectly in time for Canada day, replacing NAFTA. In Canada, it’s called CUSMA but in the US, it’s USMCA (United States-Mexico-Canada Agreement) and TMEC (Tratato Mexico-Estados Unidos-Canada) in Mexico.

In effect since January 1st, 1994, the Trump Administration’s main reason for renegotiating NAFTA was to stop the flow of automobile assembly lines heading to Mexico. NAFTA had replaced the Canada-United States Free Trade Agreement of 1988, itself broadening the scope of its predecessor, the Auto Pact of 1965. The Auto Pact began the integration of the Canadian and American automobile industries. Trump had declared NAFTA the worse-ever Free Trade Agreement signed by the United States and now declared USMCA (CUSMA), the best ever. This could lead us to believe that the new Agreement is very different from the original one but nothing is further from the truth.

With the exception of new Chapters on labour, e-commerce, SME’s and the environment, CUSMA is a cut-and-paste copy of NAFTA. The automobile industry is the most affected, as its rules of origin are more demanding, with higher percentages of North American content, new Labour Value Content rules, and a new requirement to use 70% of North-American steel and aluminium. Some of these new requirements are phased-in over several years. There are also minor changes in the rules of origin for garments, chemicals and cosmetics. For dairy, poultry and egg products, Canada has managed to maintain its supply management system, which the US wanted dismantled, but had to open the door to more US products, representing 3.6% of the Canadian market. No change regarding customs processes, with the exception of the NAFTA Certificate of Origin form replaced by an Origin Certification similar to the CETA one, though more detailed. And the Origin Certification can now be issued by the importer, which is a novel, unusual provision.

An issue on which the Americans insisted is the ‘’de minimis’’ exemption, which permits limited importation of any products free of duties and taxes. The US had raised their limit from US$200 to US$800 several years ago, following intense lobbying by e-commerce interests. Canada ended up agreeing to increase its exemption from $20 to $40 for GST and $150 for customs duties. Mexico agreed to increase theirs to the equivalent of US$50 and US117. This favours e-commerce merchants to the detriment of brick-and-mortar retailers and their customers. Oddly, the exemption will apply on products of all origins, not just on NAFTA goods, ultimately benefitting low-cost countries like China. And finally, the Agreement is not valid forever: it has a duration of 16 years, with a possible 10-year extension, and an automatic review process every 6 years.

There are some less publicized changes that could indirectly impact European companies. Geographic Indicators: the parties agreed to provide safeguards for recognition of new Geographic Indicators, including protection against issuances of GI’s that could prevent US producers from using common names. Bourbon Whiskey, Tennessee Whiskey, Tequila, Mezcal and Canadian Whisky will continue to be recognized as distinctive products.

Digital trade. The Digital Trade chapter has several provisions favourable to US companies. It prohibits customs duties from being applied to digital products distributed electronically. It also ensures that data can be transferred cross-border and that limits on where data can be stored and processed are minimized. It also limits the civil liability of internet platforms for third-party content. And for the financial sector, CUSMA includes a prohibition on local data storage requirements in circumstances where a financial regulator has access to data it need to fulfill its regulatory and supervisory mandate.

Aside from the above, there are no drastic changes in CUSMA, compared to NAFTA, except for the automobile industry, but a welcomed return to stability. Both Canadian and Mexican businesses are relieved that the new Agreement came into effect: during the renegotiation process, Trump had threatened to tear up NAFTA altogether, if he didn’t get his way. And this got everyone’s attention as the US is by far the first export market of both countries: about 75% of Canadian exports and over 80% of Mexican exports go to the US.

The new Agreement is great news for Canada and it’s also good news for European firms already active or interested in the Canadian market, as it provides stability to the Canadian economy. And for a European exporter selling in Canada, serving the US market from a Canadian distribution center is both efficient and economical. Thanks to CETA, European products enter Canada free of customs duties. They can be re-exported and enter the US free of duty if they don’t exceed the US$800 ‘’de minimis’’ limit, an ideal tool for B2C and e-commerce. The proximity of the US border also makes it easy to set-up a reverse logistics system to receive and consolidate any returns. And shipping products from Canada to anywhere in the US is cost-efficient, as there are already huge flows in both directions. The current US Administration can be unpredictable: shortly after the implementation of the new Agreement, it threatened Canadian aluminium with new tariffs and we can’t know what’s coming next. But we are still much better off with this Agreement than with none at all. Long live CUSMA!